Cathleen Trigg-Jones is the prime example of how one can set no professional boundaries. She is an Emmy Award-winning journalist, she is an actress that has appeared in dozens of TV shows and movies, an entrepreneur, and an exemplary advocate for kids and teens in the foster care system. In many ways, she made sure to reach every single goal she worked hard to fulfill.

Trigg-Jones always wanted to be an actress. So, when she started attending Delaware State University, she majored in Theater with a minor in nursing. However, when she took her first biology class- she realized that the sciences were not for her.

“So, I had a professor in a creative writing class, who said to me, ‘…you know, you're a brilliant writer, you're such a good writer. Have you ever thought about journalism? Honestly, I had never thought about journalism. I wanted to be an actress,” she said. “But I was like, well, I love writing. So, I changed my major to journalism and dropped theater altogether but continued to be in plays and pursue my love for acting.”

Even though she was all set to go, she discovered she was pregnant at 19-years-old and knew that her new focus needed to be getting a job that would help her care for her first child.

“At that point, that's when I dropped theater; I was just like… okay, so I need to think about how to make money. So, what I did was I changed to a journalism major and came up with this plan that I was going to pursue a news anchor, career news reporter, news anchor because I knew I could make a lot of money doing that,” she said. “I was sure that would also get me to New York eventually. And once I get to New York and I'm on TV during the news, it should be very easy for me to start getting acting roles, and I'll be able to pay my bills.”

For over 20 years, Cathleen Trigg-Jones has worked as a journalist at stations like WWOR-TV and FOX Broadcasting. During that same amount of time, she was able to create a multimedia production company, manage the marketing and brand strategy for Lexington Plastic Surgeons (office of husband Dr. Michael E. Jones), and founded iWomanTV along with the Trigg House- a home for young adults who were a part of the foster care system. Through this program, women and children can connect with multiple opportunities and skills-based projects. Trigg-Jones credits God for all her inspiration, inner strength, and manifestations- starting from when she was born.

“I was not wanted at birth. And around just before my second birthday, I was adopted by a military couple who gave me a powerful Southern Baptist and very strict upbringing rooted in Christianity,” she said. “And I think without that, I could have gone any way in life. But I believe that from a very young age… since about seven years old, I knew I wanted to be on television. And I dreamed of being an actress, living in New York and being on TV and all these things that I ended up manifesting in my life.”

While she was growing up, it was hard for her parents to believe that their daughter would end up on the big screen. Since they were military parents, they felt it was important for a person either go into the military, go to college, and get a good job as a teacher or a nurse.

“They couldn't support me and my dreams because they had no idea I could,” she said. “But I knew beyond a shadow of a doubt…I knew I was going to live in New York, and I was going to be on TV. I knew it. So, I don't believe that's all my doing. I believe that is definitely God; I believe that's divine. And iWomanTV is the next chapter…maybe even the final chapter of my journey through life.”

She created iWomanTV because she wanted to encourage female creative voices through the digital arts and film. The organization is also making sure to help the underrepresented like people of color, LGBTQ + individuals, and those with disabilities. In fact, the organization resulted from morning prayers and meditations that she would have. For her, young girls were at war with their minds regarding self-esteem and anxiety. So, she believed that female filmmakers were the key to changing images and creating a better future.

"Building iWomenTV was not about me. It was about building a platform that women would be able to use,” she said. "That's why I said it might be my final chapter. Because I don't believe I'm building it just for me. I believe I'm building something that's so much bigger than me, just like Noah built this ark- that was not about him at all. It was God's plan. Right. So, I believe that this is God's plan to build this platform and that other women will be able to benefit from it. And that generations of young girls will eventually only see positive images and stories that mimic what we know as women to be the truth about ourselves written through our own lens.”

The goal of the program is to engage with youth in first responder training and provide opportunities for leadership experience and career exploration.
Tamara Starr Editor

Tamara Starr Editor
You must log in to thank, flag, or reply
I disagree with this
This is unverified
Spam
Offensive
Bethlehem Mon. Jun 27 2022

Tamara Starr Editor
You must log in to thank, flag, or reply
I disagree with this
This is unverified
Spam
Offensive
Bethlehem Thu. Jun 23 2022

BCDHS Grads and ALANA Members Reflect and Celebrate their Accomplishments

Pet of the Week: Meet Precious

Learn how you can adopt Precious today!
Tamara Starr Editor

Tamara Starr Editor
You must log in to thank, flag, or reply
I disagree with this
This is unverified
Spam
Offensive
Albany Tue. Jun 21 2022

10 Things to Do Around New York This Summer

The good thing about living in New York, is that there is always somewhere you can go.
Tamara Starr Editor

Tamara Starr Editor
You must log in to thank, flag, or reply
I disagree with this
This is unverified
Spam
Offensive
New York Mon. Jun 20 2022

June marks PTSD Awareness Month and Erase PTSD Now will be hosting its official launch event to help raise money for patients who can not afford treatments.
Tamara Starr Editor

Tamara Starr Editor
You must log in to thank, flag, or reply
I disagree with this
This is unverified
Spam
Offensive
New York Sun. Jun 19 2022

Tamara Starr Editor
You must log in to thank, flag, or reply
I disagree with this
This is unverified
Spam
Offensive
Troy Thu. Jun 16 2022

Emperial Pet of the Week

Each week we will feature a furry friend from a local shelter that is looking for a new loving home.
Tamara Starr Editor

Tamara Starr Editor
You must log in to thank, flag, or reply
I disagree with this
This is unverified
Spam
Offensive
Albany Tue. Jun 14 2022 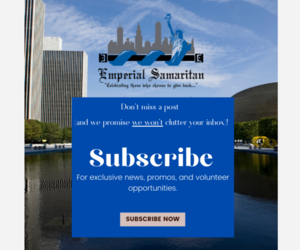 SPONSOR
Get your business noticed in New YorkAdvertise