GLIDE and eBay's annual Power of One Charity Auction Lunch with Warren Buffett has made history with a winning bid of $19,000,100. The record-breaking bid coincides with the 21st anniversary and grand finale of the legendary auction, which has raised more than $53 million to support GLIDE's transformative programs and services that lift people out of poverty, hunger, and homelessness, and advance equity through systems change.

The winner of the grand finale auction has chosen to remain anonymous. Bidding for this year's auction opened at 7:30 pm PDT on June 12 starting at $25,000 and ended at 7:30 pm PDT on June 17, with a winning bid of $19,000,100. With their generous and record-breaking bid, the 2022 winning bidder has not only made history, but will spend an unforgettable afternoon with American legend Warren Buffett at a private lunch with up to seven guests at Smith & Wollensky Steakhouse in New York City.

"It's been nothing but good," Warren Buffett has said about the lunch. "I've met a lot of interesting people from all over the world. The one universal characteristic is that they feel the money is going to be put to very good uses."

GLIDE provides opportunity, dignity, and unconditional love to the most vulnerable populations, empowering thousands of individuals and families to get off the streets, exit crisis into stability and find pathways out of poverty. GLIDE is a leading voice and change agent on social justice, changing the systems that drive poverty and inequity. Each year GLIDE helps 10,000 individuals and families across the Bay Area to make long-lasting and sustainable changes in their lives.

The grand finale and winning bid was celebrated by the GLIDE community, local elected officials and community leaders at a countdown party held in San Francisco. Conceived by the late Susie Buffett, the Power of One Charity Auction Lunch was launched in 2000. Over the past 21 years, the winning bids have ranged from $25,000 (prior to eBay's involvement) to this year's highest-ever bid of $19,000,100. Due to a two-year pandemic hiatus, the last auction took place in 2019 with a winning bid of $4,567,888. For the past 18 years, eBay has powered the Warren Buffett Power of One lunch on the eBay for Charity platform, opening the auction from just local donors to eBay's global charitable community.

"On behalf of GLIDE and those we serve, I thank Warren Buffett for his unwavering generosity, partnership and dedication, and for his incredible contribution to our mission," said GLIDE President and CEO Karen Hanrahan. "GLIDE continues to turn this generosity into opportunity and impact for thousands of people most in need. This record-breaking auction could not have come at a better time as we extend our reach to transform more lives and more systems during a time of crisis and inequity. While this is the grand finale event for the Power of One Charity Auction Lunch, we look forward to many more years of treasured friendship with Warren Buffet and our longtime partner, eBay."

"We are incredibly proud that Warren Buffett's final Power Lunch has broken our all-time record of funds raised, with all proceeds supporting GLIDE's efforts to create pathways out of crisis and transform lives," said eBay CEO Jamie Iannone. "eBay's enduring partnership with Warren Buffett and GLIDE over the past two decades has inspired charitable giving around the world, and we are deeply grateful for their unwavering dedication. Since its inception, eBay for Charity has helped thousands of organizations around the world raise more than $1.1 billion on our platform, and we look forward to building on that legacy."

The grand finale Power of One Charity Auction Lunch will take place at a mutually beneficial date and time in the coming months. As host of the annual Power of One Charity Auction Lunch, Alan Stillman, founder of Smith & Wollensky, has generously donated tens of thousands of dollars to the event. The restaurant has been called "the quintessential New York steakhouse" by Gourmet Magazine and "the steakhouse to end all arguments" by The New York Times. 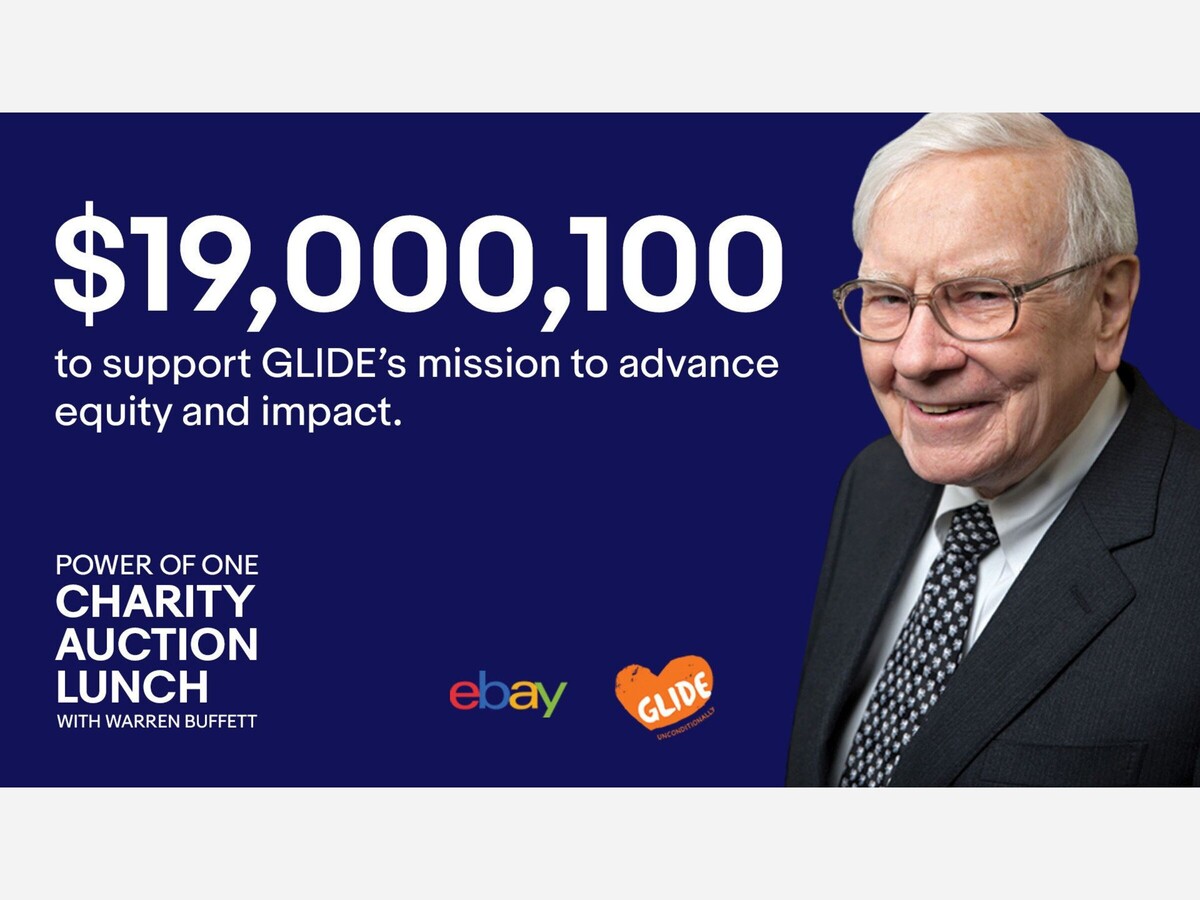