Governor Kathy Hochul today signed a legislative package that further upholds and strengthens the rights of New Yorkers with disabilities. This legislative package encourages autonomy in decision making through a Supported Decision-Making Agreement and seeks to educate the public about the myriad ways people with intellectual and developmental disabilities contribute meaningfully to their communities and reduce harmful stigma and stereotyping. Governor Hochul also issued a proclamation today commemorating the 32nd Anniversary of the Americans With Disabilities Act.

Chief Disability Officer Kim Hill said, "I am thrilled that not only is Governor Hochul signing a legislative package aimed at protecting and supporting the rights of people with disabilities, but also holding today's event to acknowledge the importance of the 32nd anniversary of the Americans with Disabilities Act. Actions such as these are what it takes to make New York the most inclusive, integrated and accessible state to live in."

Legislation (S.7107b/A.8586b) recognizes Supported Decision-Making as a less restrictive alternative to guardianship that promotes autonomy for people with intellectual and developmental disabilities and empowers them to take an active role in making choices about their own lives. Historically, when individuals with disabilities have reached adulthood, guardianship has been the primary avenue for decision-making. Supported Decision-Making changes the landscape in empowering individuals to make their own decisions with the support of a trusted person in their lives, while ensuring person-centered care and maximizing individual civil rights. The new law will formalize the legal process by which an individual with intellectual and developmental disabilities and trusted persons in their lives can reach a written agreement (a "Supported Decision-Making Agreement") that describes the settings in which the individual desires support, the kinds of support they want from each trusted person, and how they want to receive that support. It will also create obligations and corresponding immunity from liability for third parties to honor and effectuate supported decisions made using a Supported Decision-Making Agreement.

State Senator John W. Mannion said, "As Chair of the Disabilities Committee, I have vigorously pursued an agenda of equality and fairness for every New Yorker with a disability and their families and Governor Kathy Hochul has been a true partner in these efforts. These new laws will make our state more inclusive by combatting stigma and ensuring those who need services have a voice in their care and life decisions."

Assemblymember Jo Anne Simon said, "Today is a good day. We will change the landscape and empower people with intellectual and developmental disabilities by legally recognizing Supported Decision-Making Agreements, and allowing for decision-making supports to be formalized by individuals in need of assistance in making decisions for themselves, while also combatting discrimination against New Yorkers with disabilities. I'm grateful to Governor Hochul for taking this decisive action and signing S.7107b/A.8586b."

Assemblymember Carrie Woerner said, "I am pleased that Governor Hochul has signed into law this legislation. Individuals with intellectual and developmental disabilities deserve to be treated with dignity and respect. A public service campaign highlighting the accomplishments of people with developmental disabilities will help counter the stereotypes that persist in our society, and hopefully lead to more fair and equal treatment."

Legislation (A.7882a/S.6789a) replaces references to "mentally retarded" in numerous sections of New York State law to more accurate terms such as with "people with intellectual or developmental disabilities."

New York demonstrates respect for a marginalized population by replacing archaic and offensive terms with modern and acceptable terms that are representative of the respect and dignity that people with intellectual and developmental disabilities deserve.

State Senator Roxanne J. Persaud said, "There is no place for the "R" word in our vocabulary and certainly not in our laws. Until today, thirty-two years after the Americans with Disabilities Act, and twelve years after Rosa's Law, our statutes have been riddled with degrading and disempowering language toward people with disabilities. I thank Governor Hochul for signing S.6195-B and S.6789-A, which replaced more than 200 instances of the "R" word with people-first language across various state laws intended to protect and uplift New Yorkers with disabilities."

Assemblymember Thomas Abinanti said, "Today's bill signings once again show that Governor Kathy Hochul understands that the State must address the needs of people with disabilities. Removing outdated pejorative terms from New York statutes is a sign of respect - words matter. These two and today's other new laws help address some of those needs."

State Senator Samra Brouk said, "For 32 years, the Americans with Disabilities Act has made everyday life more accessible by prohibiting discrimination against those living with disabilities. On this anniversary, I am proud to join my colleagues in state government as we continue to remove barriers preventing any New Yorker from living life to its fullest based on who they are, where they live or conditions they were born with."

Assemblymember Aileen Gunther said, "I want to thank the Governor for signing this bill into law. New York's ABLE accounts have been needlessly limited to only state residents. Opening up eligibility to people across the country will help lower administrative costs here and will benefit families and individuals with disabilities. I believe we should continue to grow our ABLE program by making contributions tax deductible, but this is a step in the right direction."

In addition to the bills signed today, Governor Hochul highlighted legislation that was signed earlier this month that increases enforcement of rules related to disabled access parking spaces (A9805 /S882) and increases fines for dumping or plowing snow onto accessible parking places (A9702B /S 1271-B). These bills demonstrate the state's commitment to ensuring equal access for people with disabilities.

State Senator Tim Kennedy said, "By enacting this package of reforms, New York is once again taking steps to prioritize inclusivity and accessibility, and celebrate diversity in all forms. I applaud Governor Hochul for commemorating the anniversary of the ADA by signing these bills into law and marking meaningful change by ensuring people with disabilities have equal rights, protections, and opportunities."

State Senator John Brooks said, "As we celebrate the 32nd anniversary of the enactment of the Americans with Disabilities Act, we must work to ensure that legislation related to accessibility has the desired effect in practice. The ADA put forth sweeping protections for those who are physically disabled, among which was the mandatory installation of handicapped parking spaces. However, if these spaces are blocked or otherwise restricted, they serve no useful purpose to those who rely on them. I'm proud to have sponsored a bill, signed last week by Governor Hochul that serves to deter businesses, municipalities, and individuals from dumping or storing snow on the limited number of handicapped parking spaces available through the use of increased fines. Thank you to Governor Hochul and my colleagues in the NYS Senate and Assembly for continuing to support legislation that protects our state's most vulnerable populations."

Assemblymember Bill Magnarelli said, "The 1981 law did not take into consideration the development of large retail or 'big box' establishments with less than five stores in a plaza, so there was a loophole that discouraged local law enforcement from enforcing parking violations at these locations. The new law will ensure that those who illegally park at these establishments can get ticketed and towed if needed, ensuring that those in need have access to the spaces that were intended for them."

Assemblymember Judy Griffin said, "So many in our community - including our brave veterans, senior citizens, people with disabilities, handicaps, or other health challenges - rely on handicapped parking spots to go shopping, attend medical appointments, dine out, and so much more. It is particularly egregious when days after a snowstorm they find parking spots for the disabled are inaccessible solely because snow has been plowed or intentionally dumped on the spaces they rely on. I want to thank Governor Kathy Hochul for signing this important bill into law, as it will go a long way to ensure that handicap parking spots are not sacrificed to store excess winter snow. Thanks to the tireless advocates within the disability rights community, our supportive local village officials, and my partner in this effort, Senator John Brooks, I am proud to have fought successfully for the dignity of New Yorkers with disabilities as valued members of our local communities." 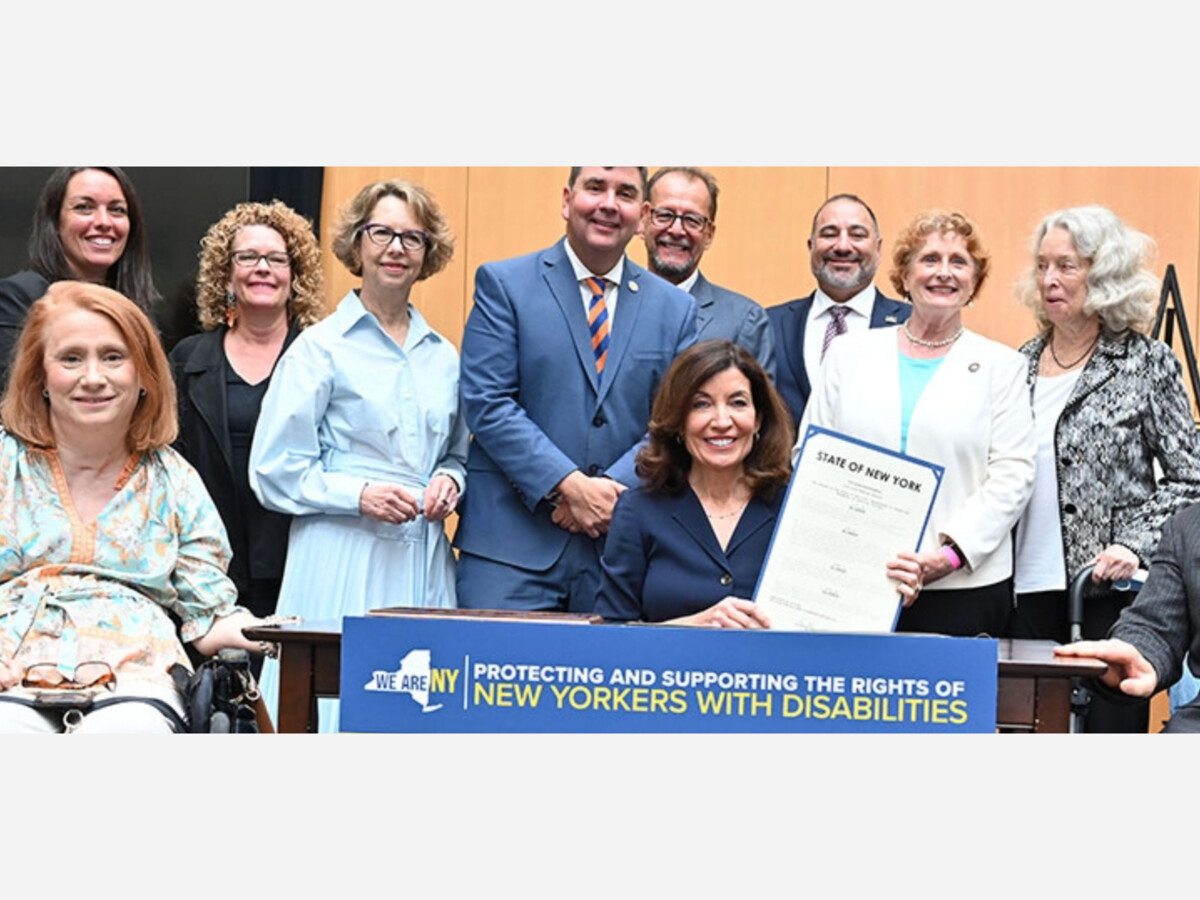